ABBA Cadabra from Vancouver, Canada, has been touring the world for the past decade, helping audiences of all ages to re-live and celebrate the timeless and uplifting music of ABBA! This high-energy and captivating stage show keeps the music of ABBA alive in a fresh, respectful and classy way. As fans of the music themselves, ABBA Cadabra prefers to not impersonate the original members of ABBA, but instead recreate the amazing music and legacy of the Swedish Super Group with powerful vocals, musicians, dancers, costumes, and lots of stories and information about the real ABBA.

The cast has had the honour of traveling to many corners of the world performing shows for the Prime Minister of Malaysia, the Malaysian Royal Family, the Buddhist Society, Tatler Magazine and International Shoe Designer Jimmy Choo. Some other performance highlights include a live televised concert for 20,000 people in at the Penang, Malaysian fair, which was broadcasted on television throughout South East Asia, countless high profile events at the Shangri La and the Mandarin Oriental in Kuala Lumpur, 4 shows at the majestic Esplanade Theatre in Singapore, a run at the International Showroom at the Genting Highlands Casino, an opening spot for Kool & The Gang at Universal Studios in Orlando Florida, The Pacific National Exhibition, The Harmony Arts Festival, The Auditorio Luiz Elisondo and Woodstock Plaza in Monterrey, Mexico! 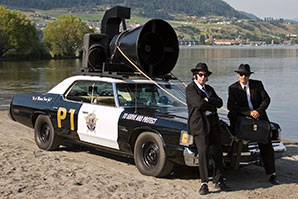 Blues Brothers Too is an amazing, high energy, and authentic tribute to the original movie made famous by John Belushi and Dan Akroyd. They play a wide variety of music. All the classics you'd expect from the movie soundtrack, as well as classic rock, R&B, and even some Country. The group members all hale from the Lower Mainland of B.C. Canada.

All the members of BB2 are very experienced and talented musicians. Featuring a world class, four piece, brass section. Drums, bass, keys and guitar. We also feature the beautiful "Trixie" Blues Too, who sings back up and lead vocals to stunning effect.
Jake and Elwood round out the act, with explosive, energy fueled choreography. All the lines and jokes from the movie, mixed in with remarkable vocals, pay perfect homage to the original duo.

Audiences all agree, from the smallest private party, to large outdoor festivals, that when the "Bluesmobile" (an authentic '74 Dodge cop car) shows up with sirens and lights blazing, they’re sure to be fully entertained.

Some of the bands accolades include: 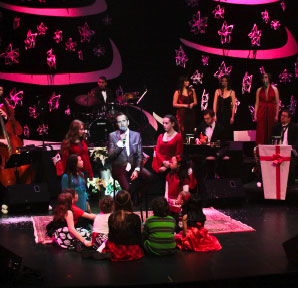 Blue Eyes Too is a tribute to the life and music made famous by Mr. Frank Sinatra.  This classic show contains colourful stories, charming humour and that memorable music made popular by Ol' Blue Eyes himself.

In this intimate tribute, headliner Tony Barton captures Sinatra’s legendary style and takes his audience on a personal and entertaining journey back in time.  With songs such as New York, New York, Nice and Easy, Under My Skin and My Way, audiences will be tapping their toes and singing along to the big band swing tunes that are still recognized today.

This show is perfect for themed events such as Casino Nights, Rat Pack, Madmen, Legends or Las Vegas.

V.E.E. says: "Tony is a fantastic performer whose effervescent on-stage-personality never fails to win over the hearts and minds of his audience. Watch his videos and look at elicited response every time he performs.

Tony cares immensely about producing the best show humanly possible, and every ounce of his being goes into his performance and that of his band. His passion for the business is unquestionable, and the huge amount of hard work he invests in every show reflects in the brilliance of the performance.

His likeability factor readily transmits to the audience every time he takes to the stage. Tony understands that performing is not all about singing and playing, it’s also about genuine interaction. And that is what sets him apart. The man has everything." 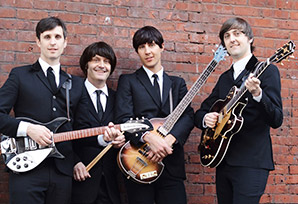 The Day Trippers are a Vancouver based Beatles tribute band that transport you back to the touring days of the early 1960s. The band embodies the exuberance of the early 1960’s spirit that the Beatles brought to the stage.

Inspired by the mod culture and a love of blues and pop music, The Day Trippers deliver the incredible music of The Beatles at their energetic peak. 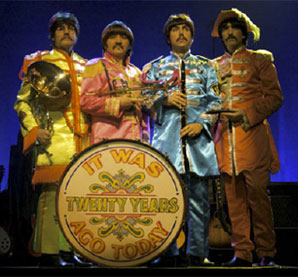 Frankly, The Fab Four are without a shadow of a doubt the world’s very best Beatles Tribute Band. A cliché this may be, but if you were to close your eyes, you would not be able to differentiate, and would firmly believe you were listening to the Beatles themselves. Open them again, and you would believe you were looking at them!!

The show commences with an appearance by an Ed Sullivan look and sound alike. Ed cracks a few funnies, warms up the audience and introduces the lads from Liverpool. On they come, and immediately their Beatle-isms are unmistakable. Their attention to detail is breath taking, the Liverpool accents, John’s lazy drawl, Paul’s pearly white smiles, George’s quirky mannerisms, and of course Ringo’s stiff yet admirable style!

They proceed to perform note-for-note renditions of Beatles songs that no other band on this planet is able to compete. This loving tribute to the best band since time began has amazed audiences all over the world, including Japan, Australia, Hong Kong, The UK, Germany, Mexico and Canada.

The Fab Four can be booked through Vantastic, and we whole-heartedly recommend that you do so!

Moon Coin has been creating memorable & joyful experiences for audiences of all ages & cultures for the past 13 years. Their tribute acts, themed shows and cover bands come in a range of sizes to suit events large and small including Corporate Events, Festivals, Community Events, Casinos, Fundraisers, Theatres, Private Parties and Weddings!

All shows are professionally costumed & choreographed and feature some of the industry’s best singers, musicians, dancers & technicians. We can customize shows to suit the theme of any event and can also provide all of the sound & lighting production needed for the show.

The Overtures present a faithful and dynamic tribute to pop's greatest decade!

With their magnificent repertoire of over 400 songs they have rapidly built their reputation as the finest 60’s tribute band in the world.
You'll hear every aspect of sixties music from the early 'Merseybeat' of The Beatles and The Searchers through to the 'surf' sound of The Beach Boys – the rhythm and blues of The Rolling Stones to the folk-rock of The Byrds and The Mamas and The Papas – the close harmony of Simon and Garfunkel to the psychedelic power of Jimi Hendrix.
Whether you are a 'Hippie', 'Mod' or 'Rocker', as Sergeant Pepper says... "A splendid time is guaranteed for all!"

"This band is amazing! They're just the best band of their kind in the world."  Elton John - GQ Magazine

They are firm favourites on the private party and corporate event circuit, performing for the likes of Sir Paul McCartney at his after-show party in December 2009 at Matter nightclub at The O2 Arena, Elvis Costello and Diane Krall, Kenney Jones (ex of The Who and The Small Faces), the annual Liverpool Beatles Convention, the Cavern Club and many, many others too confidential to mention.

In November 2008, Sir Elton invited the band to entertain, this time at a party thrown to celebrate Lulu's 60th Birthday. Many of the musical legends present were at one time or another coaxed on to the stage to perform with the band.

Two weeks following Lulu's party Sir Elton asked the band to support him at his New Year's Eve show at The O2 Arena in London! The band performed a 40-minute set to 17,000 people.

January 2009 saw The Overtures realise another ambition. They played three sell-out shows in Las Vegas where they performed their theatre production, 'The Bootleg 60s Sight and Sound Show" at the Suncoast Casino. The band returned in September 2009 for a further four shows at The Orleans Casino to standing ovations.
In April and May 2010, The Overtures appeared on live television, first in Germany, where they provided backing for Robin Gibb, Peter Noone and Chubby Checker, and then in Majorca, for the German TV show Wetten Das, performing with the American music legend, Lionel Richie, seen live, by countless millions.
Need we say more...